Sheriff Joe Is In The News, Again…

SHERIFF JOE IS AT IT AGAIN !  You may remember Sheriff Joe Arpaio of Arizona, who painted the jail cells pink and made the inmates wear pink prison garb. 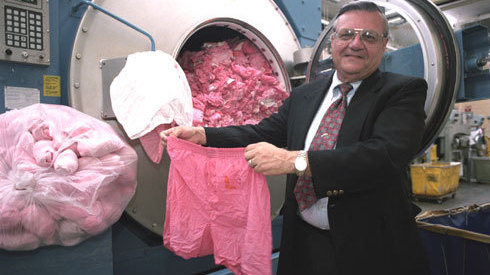 Well………SHERIFF JOE IS AT IT AGAIN !

Oh, there’s MUCH more to know about Sheriff Joe !

Maricopa County was spending approx. $18 million dollars a year on stray animals, like cats and dogs. Sheriff Joe offered to take the department over, and the CountySupervisors said okay.

The animal shelters are now all staffed and operated by prisoners. They feed and care for the strays. Every animal in his care is taken out and walked twice daily. He now has prisoners who are experts in animal nutrition and behavior. They give great classes for anyone who’d like to adopt an animal. He has literally taken stray dogs off the street, given them to the care of prisoners, and had them place in dog shows.

The best part? His budget for the entire department is now under $3 million.

The prisoners get the benefit of about $0.28 an hour for working, but most would work for free, just to be out of their cells for the day. Most of his budget is for utilities, building maintenance, etc. He pays the prisoners out of the fees collected for adopted animals.

I have long wondered when the rest of the country would take a look at the way he runs the jail system and copy some of his ideas. He has a huge farm, donated to the county years
ago, where inmates can work, and they grow most of their own fresh vegetables and food, doing all the work and harvesting by hand.

He has a pretty good sized hog farm, which provides meat and fertilizer. It fertilizes the Christmas tree nursery, where prisoners work, and you can buy a living Christmas tree for $6 – $8 for the holidays and plant it later.

Yup, he was re-elected last year with 83% of the vote.

Now he’s in trouble with the ACLU again. He painted all his buses and vehicles with a mural that has a special hotline phone number painted on it, where you can call and report
suspected illegal aliens. Immigrations and Customs Enforcement wasn’t doing enough in his eyes, so he had 40 deputies trained specifically for enforcing immigration laws, started up his
hotline, and bought 4 new buses just for hauling folks back to the border. He’s kind of a ‘Git-R-Dun’ kind of Sheriff. 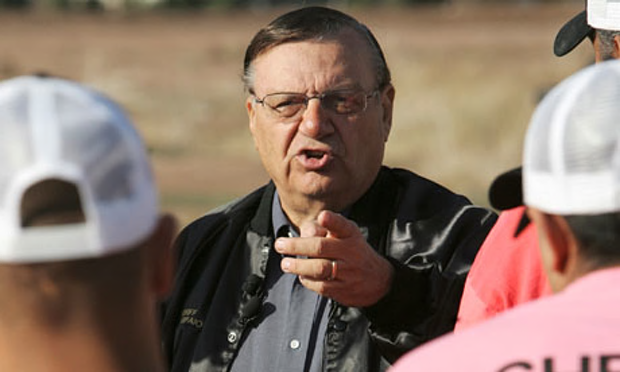 The Fantastic Fly Geyser In Nevada