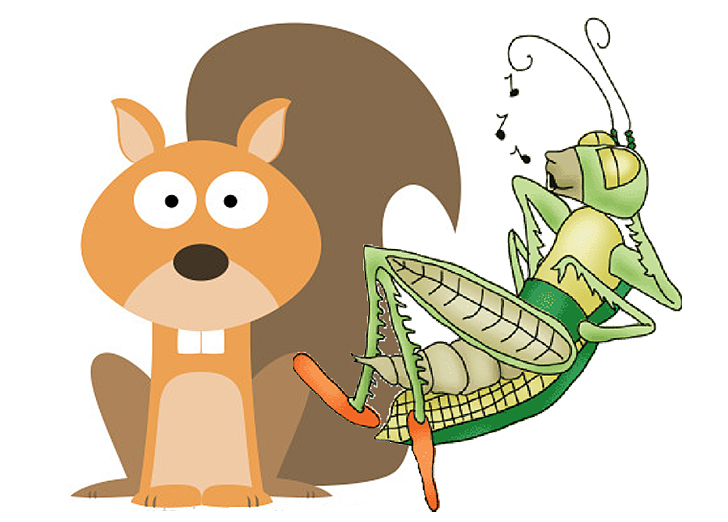 The Squirrel And The Grasshopper, The World And British Versions

The Squirrel And The Grasshopper  (THE WORLD VERSION)

The squirrel works hard in the withering heat all summer long, building and improving his house and laying up supplies for the winter. The grasshopper thinks he’s a fool, and laughs and dances and plays the summer away.

Come winter the squirrel is warm and well fed. The shivering grasshopper has no food or shelter, so he dies out in the cold.

The Squirrel & The Grasshopper  (THE BRITISH VERSION)

The squirrel works hard in the withering heat all summer long, building and improving his house and laying up supplies for the winter. The grasshopper thinks he’s a fool, and laughs and dances and plays the Summer away.

Come winter the squirrel is warm and well fed.

A social worker finds the shivering grasshopper, calls a press conference and demands to know why the squirrel should be allowed to be warm and well fed while others less fortunate, like the grasshopper, are cold and starving.  The BBC shows up to provide live coverage of the shivering grasshopper; with cuts to a video of the squirrel in his comfortable warm home with a table laden with food. The British press informs people that they should be ashamed that in a country of such wealth, this poor grasshopper is allowed to suffer so while others have plenty. The Labour party, Greenpeace, Animal Rights and The Grasshopper Council of GB demonstrate in front of the squirrel’s house.

The BBC, interrupting a cultural festival special live from Notting Hill with breaking news, broadcasts a multi-cultural choir singing “We shall overcome”  Ken Livingstone rants in an interview with Trevor McDonald that the squirrel has gotten rich off the backs of the grasshoppers, and calls for an immediate tax hike on the squirrel to make him pay his “fair share” and increases the charge for squirrels to enter inner London.

In response to pressure from the media, the government drafts the Economic Equity and Grasshopper Anti-Discrimination Act, retroactive to the beginning of summer. The squirrel’s taxes are reassessed. He is taken to court and fined for failing to hire grasshoppers as builders for the work he was doing on his home and an additional fine for contempt when he told the court the grasshopper did not want to work. The grasshopper is provided with a council house, financial aid to furnish it and an account with a local taxi firm  to ensure he can be socially mobile. The squirrel’s food is seized and re-distributed to the more needy members of society, in this case the grasshopper.

Without enough money to buy more food, to pay the fine and his newly  imposed retroactive taxes, the squirrel has to downsize and start building a new home. The local authority takes over his old home and utilizes it as a temporary home for asylum seeking cats who had hijacked a plane to get to Britain as they had to share their country of  origin with mice. On arrival they tried to blow up the airport because of Britain’s apparent love for dogs. The cats had been arrested for the international offence of hijacking and attempted bombing but were immediately released because the police fed them pilchards instead of salmon whilst in custody. Initial moves to then return them to their own country were abandoned because it was feared they may face death by mice. The cats devise and start a scam to obtain money from peoples credit cards.

A Panorama special shows the grasshopper finishing up the last of the squirrel’s food, though spring is still months away, while the council house he is in crumbles around him because he   hasn’t bothered to maintain the house. He is shown to be taking drugs. Inadequate government funding is blamed for the grasshoppers “illness”.

The cats seek recompense in the British courts for their treatment since arrival in the UK.

The grasshopper gets arrested for stabbing an old dog during a burglary to get money for his drugs habit. He is imprisoned but released immediately because he has been in custody for a few weeks. He is placed in the supervisory care of the probation service to monitor him. Within a few weeks he has killed a guinea pig in a botched robbery.

A commission of enquiry that will eventually cost 10,000,000 pounds and state the obvious is set up.

The grasshopper dies of a drug overdose. The usual sections of press blame it on the failings of the government to address the root causes of despair arising from social inequity and his traumatic experience in prison. They call for the resignation of a minister.

The cats are paid a million pounds each  because their rights were infringed when the government failed to inform them there were mice in the UK.

The squirrel, the dogs and the victims of the hijacking, the bombing, the burglaries and robberies have to pay an additional percentage on their credit cards to cover losses, their taxes are increased to pay for law and order and they are told that they will have to work beyond 65 because of a short fall in government funds.

The Squirrel And The Grasshopper, The World And British Versions

Found In A Parking Lot Of A Grocery Store In Menominee, Michigan


TWO WAYS TO SPOT A MILLIONAIRE